On Saturday while visiting the Spit with seven members of the Wairarapa branch of Birds NZ we sited a bittern flying from the jointed rushes near the carpark and over the Kiriwai Lagoon. This was very exciting as just 2 days previously we had been at a meeting with bittern expert John Cheyne who told us that the Australasian bittern is extremely endangered here in NZ as well as in Australia. It is estimated that there are only approx 700-800 birds in NZ at present. So what a thrill to see one at Kiriwai Lagoon and then later in the day we saw another bird at the Pounui Lagoon. These birds are magnificent in flight, very graceful with an enormous wingspan. Dougal did try to take a picture, but the quality was poor as the bird really surprised us.
The following picture is of some white faced heron fishing around the waters edge – much easier to capture at the time!
L 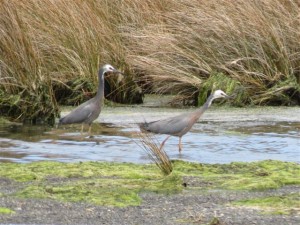